Emco's mines produce siliceous iron-ore. Its deposits were identified as early as 1941 and since 1957, when Emco commenced its operations, the mine has been producing siliceous magnetite and hematitic ore. For the most part, hematite has overlain the siliceous magnetitic ore and has formed predominantly from weathering of Banded Hematitic Quartzites (BHQs).

BHQs are an abrasive rock formation that are extremely tough and hard and bear bands of silica interspersed with magnetite ore yielding a stunning metallic lustre. Over millions of years, BHQs have weathered into friable ore thus making it amenable to be extracted with little or no drilling or blasting.

In order to enhance the grade of the ore and given the magnetite content, the ore is beneficiated using a combination of techniques such as screening, washing and wet magnetic separation which liberates the iron material from the non-iron material. The ore thus obtained is the end-product of mining which serves as raw material for the all-important iron & steel industry.

Magnetite ore (Fe3O4) – which is the principal ore produced from our mines – is in a sense a “green ore”. When the iron ore is fed into a blast furnace, the extra molecule of oxygen in the ore serves to catalyze the reduction of ore faster without or with lesser use of a reducing agent such as coke. This in turns directly helps reduce carbon emissions in the manufacture of steel.

Since the mid-1990s, our focus has increased on providing mechanized barge-loading facilities for other mining companies. 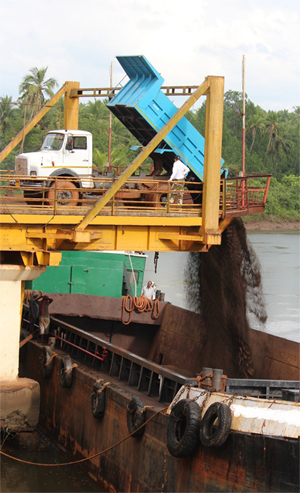 Barges are the lifeline of the transport infrastructure of the Goan mining industry. They help transport ore mined in the hinterland to Marmagao harbor, approximately 60 kms. away. Every year, tens of millions of tonnes are moved to Marmagao harbour from where the ore is exported, earning valuable foreign exchange for the country.

Emco's barge loading operations are located in South Goa and are supported by:

A brief history of mining in Goa

Metallurgy in general and production of iron & steel in particular have always been an important part of civilization. The uses have expanded vastly, products have become more sophisticated and technologies have advanced, but the fundamental input remains the same: iron-ore. Hematite and Magnetite are the predominant ores of iron from which iron can be extracted economically.

Although it was the erstwhile Portuguese regime that commercialized iron-ore mining in Goa and nurtured its growth as an industry, it was in fact, visiting French geologists that first identified the presence of ore deposits in Goa. The surface indications of laterite outcrops embedded with iron were the early indicators of nature’s reserves lying dormant below the surface.

There is evidence to suggest that the French geologists used adits - a near-horizontal duct or passage to a mineral vein that allows exploration, draining of water and extraction of minerals – and similar means including tunnels in the hills. The discovery and further exploration revealed vast reserves or several hundred million tonnes of low-grade iron ores with relatively higher purity in North Goa and lower grades in South Goa.

In 1969, the Group acquired the assets of Eastern Mining Co. (Mysore) Pvt. Ltd., a mining firm headquartered in Londa in North Kanara's Belgaum district. The firm had manganese-ore leases and mining operations in and around North Kanara's Supa district, in the villages of Terali, Kurundi and Ushoda. Thereupon, exports to its Japanese customers included manganese ore in addition to iron ore.

Emco Goa Private Limited and Eastern Mining Company (Mysore) Pvt. Ltd. continued to export iron-ore and managense ore respectively, until 1987. Between 1987 and the late 1990s, the companies focused on its mining operations and sold its ores to domestic exporters, including the Government-owned and run MMTC Ltd.

Since the late 1990s, Emco's focus has predominantly been on provision of barge-loading facilities to other mining companies.

Click here to read the Group's history in entirety.

Mining is a core industry as it provides the raw material for iron & steel which has always been a crucial building block since the beginning of civilization. While economies all over the world - and particularly developing ones - are busy building their infrastructure, the demand for iron & steel and with it, for iron ore, has increased. Iron & Steel are required to meet the demand not only infrastructure development, but also for everything from paper pins to aeroplanes - including cars, two-wheelers, cutlery, etc. Notwithstanding the cyclical variations in market conditions, the demand for iron-ore will continue - at least under the current technology - as long as there is demand for iron & steel. 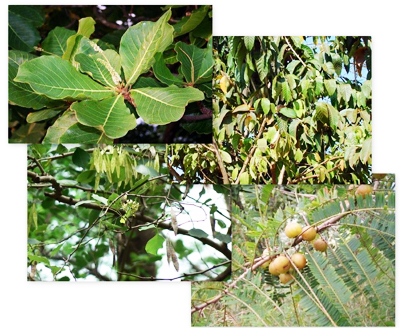 Under these circumstances it is important to ensure that while the demand for iron-ore is met, the impact of mining operations on the environment is minimized.

Our approach to minimizing our carbon footprint comprises a three-pronged approach:

Carefully planned afforestation in consultation with the Department of Forests ensures that the families of plants chosen are best suited for the biodiversity of the environment in which they will grow. Sapling density is restricted to 2,000 per hectare to improve plant mortality and are consistently done on dead dumps. Over the years, the following samples have been planted:

Of the above, “Accacia Auriculiformis” has special significance - this species was introduced in newly dumped areas, as the freshly mined out dumps are devoid of any nutrients and are incapable of supporting plant life. Acacia, has the unique ability to infuse nitrogen in the soil, which is drawn from atmosphere. After a couple of years, this species empowers the soil in the dumps, making it nitrogen rich and amenable to accept other plants. The fact that it stabilizes the dumps and injects a green canopy rapidly, is a positive side-effect.

Mechanized Dust-Suppression: Continuous dust-suppression through controlled spraying of water on the approach roads in and around ore stacks and near the jetties vastly reduces dust pollution in the immediate vicinity.


Green fleet: Our entire fleet is well-maintained to ensure controlled emissions and to optimize fuel consumption. Further, since our fleet comprises state-of-the-air earth-movers, on-board ECUs facilitate regular monitoring of all key operating parameters that will directly impact emissions and fuel efficiency. This provides the twin advantages of fuel-efficiency and cost-optimization.


A pan-India apex body representing the interests of the mining industry. The Federation consists of over 400 establishments. Its primary purpose is to promote the interests of mining, mineral processing, metal making and other mineral-based industries. FIMI also provides a forum to address a wide range of common problems and serves as a platform to represent issues of common relevance to the Central Government.

Emco's Directors are actively involved in and have served in various capacities since the late 1970s, including as Vice-President during 1972-74 and as the President from 1992-1994.

Goa’s local mining-industry bodies:  an industry association formed to promote, support, protect, maintain and increase the export trade of mineral ores in Goa. GMOEA - and its sister organization, GMA - serves as a forum for addressing problems at a state level, that affect the industry as a whole. It provides a platform for actively interfacing with regulatory authorities in the State Government and to facilitate smoother business operations and enhance overall compliance with local laws.

Emco's Directors have served in various capacities, including as the Honorary Secretary when GMOEA was first established in 1963 and various roles thereafter.

Mineral Foundation of Goa is a non-profit organization, exclusively funded by the mining industry with annual subscriptions. The organization is professionally managed and totally dedicated to promotion of environmental and social development programmes in mining belt of Goa.

Emco's Directors played an instrumental role in establishing the Foundation in 2000 and have continued to serve in various capacities since then.